A shared vision for the Management of the Drin River Basin

The recognition of the water-food-energy nexus is essential to human survival and sustainable development. With a rising global population, advancing urbanization and intensive economic growth, the demand for all three is constantly increasing. The inevitable interconnections between these domains, as well as transboundary challenges, require a more holistic approach to freshwater management that takes into account potential trade-offs and synergies and ensures that the limited resources are used efficiently and within the planetary boundaries. 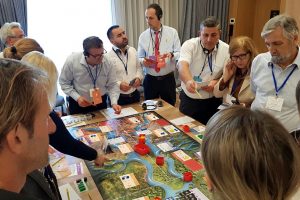 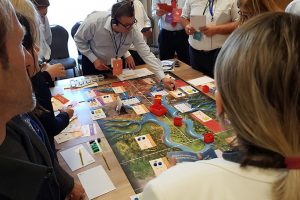 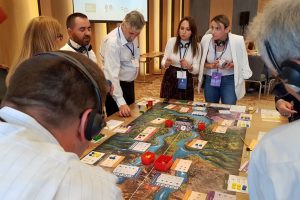 Transboundary river management poses a unique challenge to riparian economies that range from differences in the legal framework to distinct monitoring practices and water uses. When coordinated well, a shared water basin may become a key driver for cooperation, sustainable development, and integrated resources management. At the same time, conflicting needs and divergent management approaches may easily cause ecosystem degradation and inhibit development in the region. How to turn this complicated geopolitical situation into a social and economic opportunity? The Nexus Game is a laboratory for practicing strategy, collaboration, and leadership in a complex environment such as an international river basin. It is much more than a game – it is a social simulation that brings together stakeholders with diverse backgrounds and values.

A defining moment in the process towards the sustainable management of the Drin River Basin was the signing of a Memorandum of Understanding
(MoU) by the Ministers of the Drin Riparians at a regional consultation meeting held in 2011 in Tirana, Albania. The Drin Core Group, which coordinates actions among the Parties (to the MoU) for the implementation of the MoU and three Expert Working Groups have been established on the Water Framework Directive implementation, Monitoring and Information exchange, and Biodiversity. During the 3rd Regional Nexus Roundtable in Tirana in 2019, the multi‐stakeholder process for the establishment of the Shared Vision took place.

The participants of the workshop were divided into two parallel game sessions and took on the roles of the decision-makers from 3 different sectors (water, food, energy) in 3 bordering economies – Laurentia, Vespugia, and Kenorland. With water inflows dependent on the variable seasonal patterns and additional spatial barriers (mountains), players had to learn how to strategically plan their next moves and wisely distribute their water. A purposeful element of “unfairness” embedded in the simulation (the upstream economies were given a key advantage over the rest of the territories when it comes to hydro energy production) created additional pressure and room for potential conflicts.

For a couple of hours, participants interacted with each other in a shared, safe environment, which reflects the key aspects of the real world (Drin river basin). They had an opportunity to face the problems related to complex interconnections between water, energy, food, and environment, to confront opposing views, and solve conflicts via negotiations and dialogue. The results of the simulation were debriefed providing inspiration for tackling the real-world challenges and ideas for new, integrated solutions.

Among many benefits of the simulation that was listed by the participants was its potential to trigger “(a) better understanding of transboundary cooperation and coordination”. One of the participants stated in the post-workshop survey that the simulation inspired him “to put emphasis on project management and implementation of the Nexus element in harmonizing them to keep a balance between energy, water and food and environment-biodiversity.” There were also many voices that directly linked the experience from the Nexus Game to the Drin River situation, for example, participants expressed the need for Drin river commission, which could coordinate transboundary investments and projects. Some even declared to “keep in touch with participants from other countries and agencies” to sustain the developed through the workshop cooperation.